You are at:Home»Deer»Hunting Tactics – Scents and Attractants
Years ago a few enterprising sportsmen began experimenting with the notion that deer are attracted to the odors of other deer. Many guys scoffed at them. However, scientists have intensely studied whitetail behavior and discovered that the entire world of does and bucks revolves around scents of one type or another. Consequently, the hunter who understands why and how deer scents work can fool even the smartest buck.

The whitetail lives in a world of dense cover and small openings. Rarely is an entire herd together to deal with various situations in the hierarchy. As a result, deer have evolved a unique method of scent communication, called signposting, which is most prominent during the fall rut.

Bucks rub trees not only as visual displays of their presence, but also as olfactory signposts. They leave secretions on rubs from their forehead glands, noses and saliva. Other bucks and does sniff the rubs to sort things out in the hierarchy. As the rut draws near, bucks scrape to leave their individual calling cards, warning other bucks to stay away and greeting passing does to stick around. 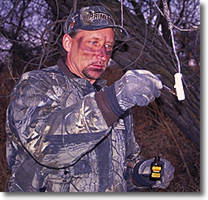 Hunters have experienced success in recent years by creating fake, or mock, rubs and scrapes. To create a mock rub, vigorously rub a sapling with a shed antler and then adding some pre-orbital lure. Lay down a series of rubs in a bottom or along a low ridge where you will also create mock scrapes.

Find a low branch and scrape debris from underneath it. Add buck urine to the fake scrape and then dab some pre-orbital lure to the “lick branch” above it. Next, pour a little doe-in-heat urine into the scrape.

String 4 or 5 scrapes along a bottom or ridge with fake rubs in between. Pull a “drag line” (a cloth saturated with doe-in-heat scent) between scrapes. Then stand hunt in the area. A passing buck might see or smell a rub and then begin sniffing along the drag line from scrape to scrape, hoping to spot the hot doe in the area. Of course you’re sitting there waiting for him.