You are at:Home»Deer»Hunting Hard Antlered Deer In Summer

If you ever wondered what it would be like to pursue deer in hard antler in the summer, hunting

Antonio to London. The scheduled short layover out of Atlanta extended for over four hours, but by

noon Sunday we met up with our friend and professional hunter Kevin Downer, owner of Kevin Downer

Sporting Consultants, at Heathrow, and made the short two-hour drive to West Hoathly and the 16th

century freehouse, The Cat Inn, which was our home over the next five days. Just short of West Hoathly

been seeing. Following a short round observing several bucks and a few does, we enjoyed a ‘Sunday

roast’ dinner at The Fox, an eating and drinking house. 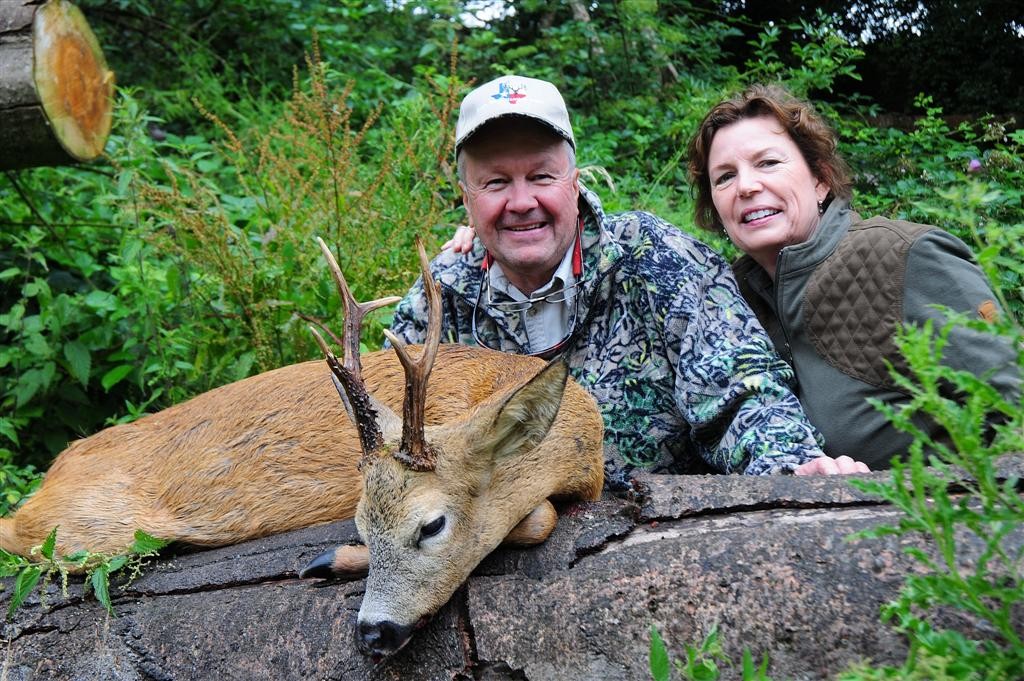 The following cloudy, dank morning we found ourselves stalking along a fence row separating

several grass-laden fields in a light drizzle. Without the arrival of my luggage, the only footwear I had to

hunt in was my tennis shoes which absorbed the rain from the damp vegetation like a sponge. But it

was laid on the shooting sticks as I awaited Kevin’s confirmation to shoot, which was virtually

immediate. With the crosshairs on the shoulder of the red-colored, tailless buck, I fired, and the 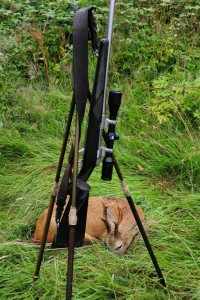 truck. In the silence of their absence I began preparing the animal for a photo shoot while thinking how

easy success occurred, yet remembering just how hard it can be at times.

After obtaining a series of photographic memories, we dropped the eviscerated animal off at

the farm’s walk-in cooler, and then returned to the Cat where we enjoyed a fine English breakfast.

Following a short nap, Kevin took us to the impeccably well-maintained Hever Castle which was

the childhood home of Anne Boleyn, the second wife of Henry VIII. After touring the castle and visually

salivating over the beautiful flower gardens on the grounds, we returned to our room and prepared for

our evening hunt as a Delta representative showed up with my luggage. A short change of clothes later,

we were back out paralleling fields planted to harvest beans. Flocks of wood pigeons exploded skyward

from the bean fields while rabbits continuously crisscrossed the weed-laden roads we traversed,

attracting our attention while we scanned the forest’s edge for deer. By 9:30 with light rapidly fading,

we returned to the village and turned in. 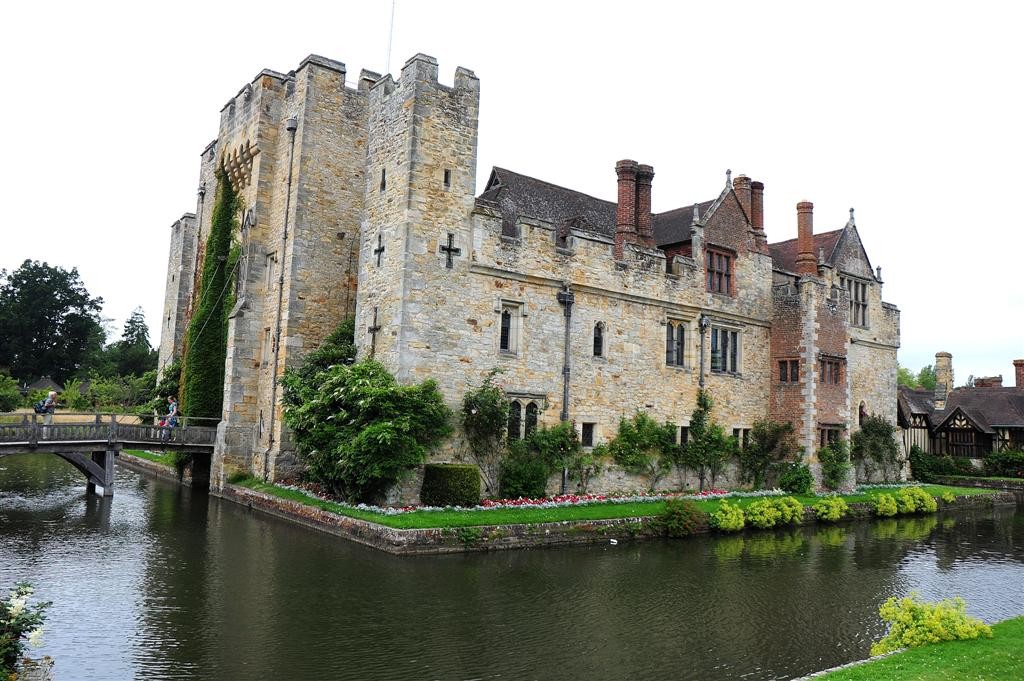 Up at 4:30 and gone by five on our second morning, we traveled some 40 minutes to Ockley

where we hunted on 1,000 acres of undulating farmland planted in wheat and harvester bean and

interspersed with forested tracts. A light fog interrupted our visibility initially, but once it dissipated, we

began to see deer, but in the taller vegetation seeing the deer was challenging. Paralleling the edge of a

partially shredded field, we spotted a nice buck hazing a doe, but before we got a good look at its rack, it

slunk off into the dark forest. Seconds later another male supporting some substantial headgear

appeared at the tree line, and before I knew it, I was preparing for a shot. Once Kevin declared it a

keeper, I gently squeezed the trigger and the animal dashed off in a clumsy run paralleling the forest and

shredded grain field. “Did you hit him?” asked Kevin, and I responded with “It certainly felt good”, but

was not certain. A short period later, we were walking along the sparsely vegetated area separating the

forest from the bean field. The discovery of blood was uplifting, and 40 or so yards further laid a

beautiful roe buck, my second, and now it was Jan’s turn. 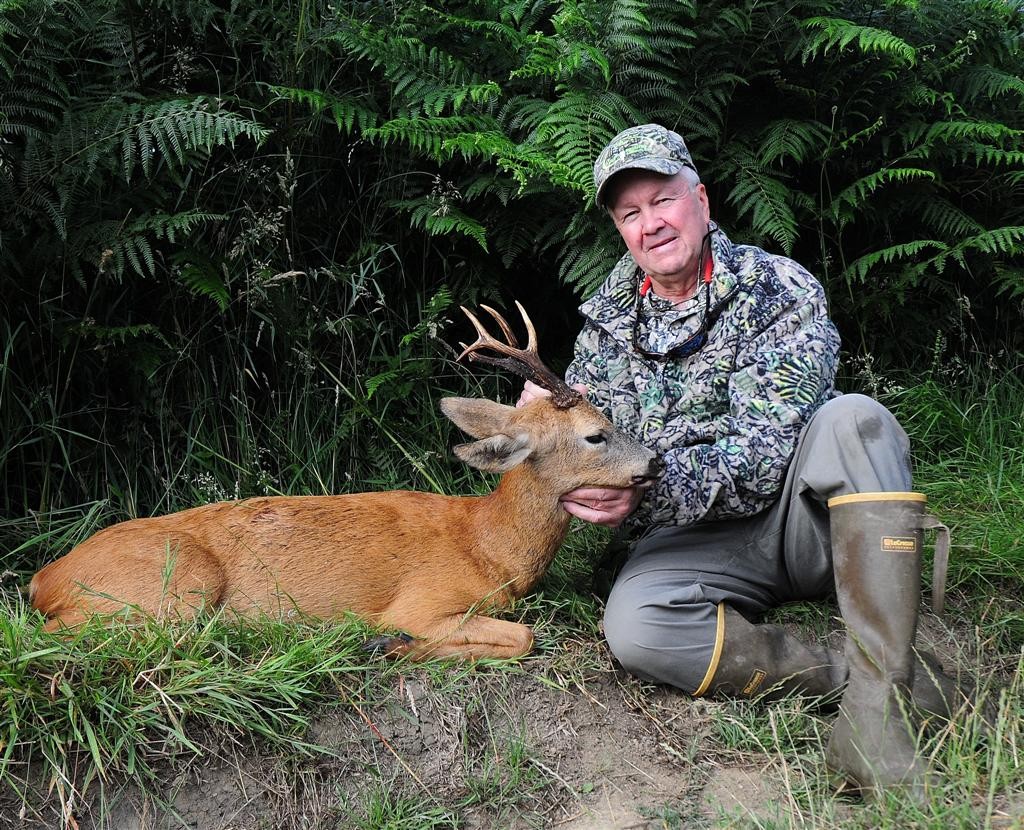