You are at:Home»Deer»The Three Stages of The Rut
Pre-Rut 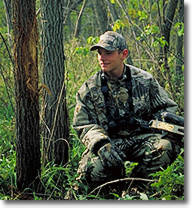 The early-autumn pre-rut is the time before deer mate. In September, does and bucks commingle and graze together in fields and woodland openings. This is one of the only times that males and females are seen side by side. Later in the pre-rut deer become more aggressive. Does drive yearling bucks away and sometimes seek isolation. Mature bucks challenge other males. This aggressiveness can cause bucks to become careless; thus the late pre-rut can be an ideal time to hunt.

During the pre-rut, the hormone estrogen prepares a doe’s internal organs for birthing. It also causes the emotional changes, like intolerance, discussed above. Late in the pre-rut does wander extensively throughout their home range. This makes it easy for bucks to find does. Not much else changes in the doe’s life.

Bucks, on the other hand, undergo a great change. It begins with the shedding of velvet. As a buck’s testosterone level increases, his antlers mature, stop growing and harden. The velvet then dies and starts to peel. The dry strips of velvet seem to irritate a buck; he rubs his antlers on trees, limbs and the like to remove the velvet. This process is sometimes called “rub off.”

Oftentimes you’ll see a buck work his forehead on a tree as he rubs off velvet. He is probably smearing on scent from his forehead (pre-orbital) gland. Researchers continue to study what a buck might be communicating to other deer as he deposits the scent. As the pre-rut progresses, tensions rise among bucks. They begin to split from the social herds they formed over the spring and summer. The bigger, older bucks begin to wander far and wide in search of mates. Bucks are at peak weight, and their increased levels of testosterone have enlarged their necks and sex organs. This is the time when the massive and majestic buck of hunting lore can be found.

Eager to test their polished antlers bucks engage in light sparring. It should be noted that sparring is not fighting. Rather, it is a gentle sport between 2 and sometimes 3 bucks. Sometimes an older, larger buck will offer one antler to a younger buck for sparring. Sparring matches early in the pre-rut are thought to strengthen social bonds among bucks. They establish and confirm the dominance of bucks in a local hierarchy.

As the pre-rut progresses, sparring matches can turn in to all-out fights. Two mature bucks lower their heads, approach one another and lock antlers. Powerful pushing and shoving occur, with dirt and leaves flying high into the air. The opponents try to flip each other. Most fights are short. One buck quickly realizes that the other is stouter. The loser breaks and runs off, often with the victor following and hooking him in the flank with an antler.

Most dominant bucks are larger, older males, the ones with the best genes. In herds with fairly balanced buck:doe ratios, dominant bucks do most of the mating. This is nature’s way of ensuring that future generations acquire the strongest genes.

During the pre-rut, bucks engage in an activity called “signposting”. In this way they lay down their individual scent or “calling card” to communicate with other deer. There are two types of signposting: the pawing of scrapes and the rubbing of trees. Rubs and scrapes are often found in the same areas and along trails, edges and funnels where lots of deer travel. Mature bucks generally make the fall’s first rubs and scrapes. Older deer tend to signpost more than immature males.

A buck likes to scrape beneath a tree branch. He licks the overhanging limb and rubs it with his forehead gland to deposit scent. A buck paws the ground, opening an area 3 to 4 feet wide. While making a scrape, a buck leaves scent from the interdigital glands on his feet. A buck might then rub-urinate, or pee over his tarsal glands, into a scrape. This scent pool is powerful, often strong enough for a hunter to smell. Does and other bucks sometimes urinate in or near a scrape.

During the pre-rut, bucks will also engage in an activity called signposting. Signposting is used to signal other does that the buck is in heat, and to warn rival bucks to stay away. Bucks use their glands to deposit scents which carry this information. There are two types of signposting: scrapes and rubs. These two are almost always found near each other, and are usually found on trails which deer often travel. Older bucks will scrape and rub earlier and more often than younger bucks.

Scrapes are most often found under tree branches. Bucks lick these tree branches and rub them with their forehead in order to deposit scents from their forehead gland, their pre-orbital gland, and their saliva. The buck will then scrape the ground beneath the branch, leaving an open area about 3 to 4 feet wide. While making the scrape, scent will be deposited from the interdigital glands. The buck then rub-urinates in the scrape. The scent from rub-urinating is very strong, often strong enough for a human to smell.

Bucks often paw scrapes on ridges, where their scent disperses widely. A buck may cluster many scrapes in a small “breeding core area”.

When a buck rubs, he strips bark off trees and saplings with his antlers. He rubs his forehead against the trees to leave scent. A fresh, white, shiny rub also serves as a visual signal to other deer. Many bucks prefer to rub an aromatic tree, such as a pine or cedar. Bucks have also been known to rub fence posts and power poles. Generally the bigger the tree, the bigger the buck that rubbed it.

Bucks travel far and wide during the rut, often venturing miles outside their home range, running from one doe unit to the next. Once a mature buck finds a doe on the brink of estrus he dashes at her, often grunting and wheezing. Subdominant bucks may join the chase, but it is almost always the big boy that gets the doe. 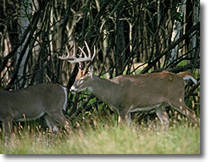 Often a buck and doe hook up and isolate themselves from other deer, maybe ducking into a secluded thicket. The doe urinates. The buck analyzes the pee through vomolfaction, the process of sucking urine into an organ in the roof of his mouth. It is believed that vomolfaction serves two purposes. First, it tells a buck if a doe is close to entering estrus. Second, it stimulates the buck and prepares him for breeding.

If a buck’s analysis reveals that a doe is close to estrus, he follows her with his head low and his neck outstretched. He might dog her like that for a day or two. Shortly befo