You are at:Home»Journal»Ibex hunt in Spain Part 2

Based on the weather forecast, day two was to be sunny and clear, but the

mountaintop was pounded by a snow storm overnight, making for some unforgettable

scenes of snow-covered pine and partially exposed rock, especially while the sun was

out. But it didn’t last long as the fog returned, blanketing the mountains for the rest of 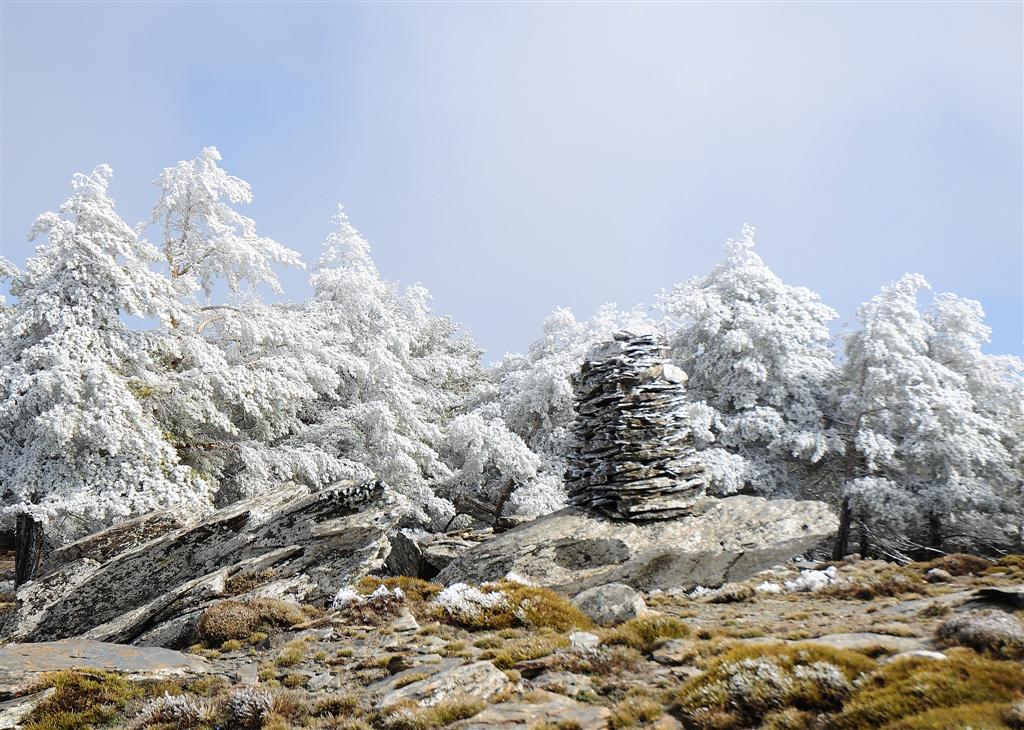 Dropping down into the valley visibility was adequate, so we glassed from

several vantage points throughout the day, but only saw a few ewes. While hiking

several ridgelines, we came across a wild pig and several red deer, my first in Spain, but

after several extended hikes, it was apparent that few rams inhabited the area. By dark

we negotiated the slushy roads over the top and back down the mountain to Almeria. 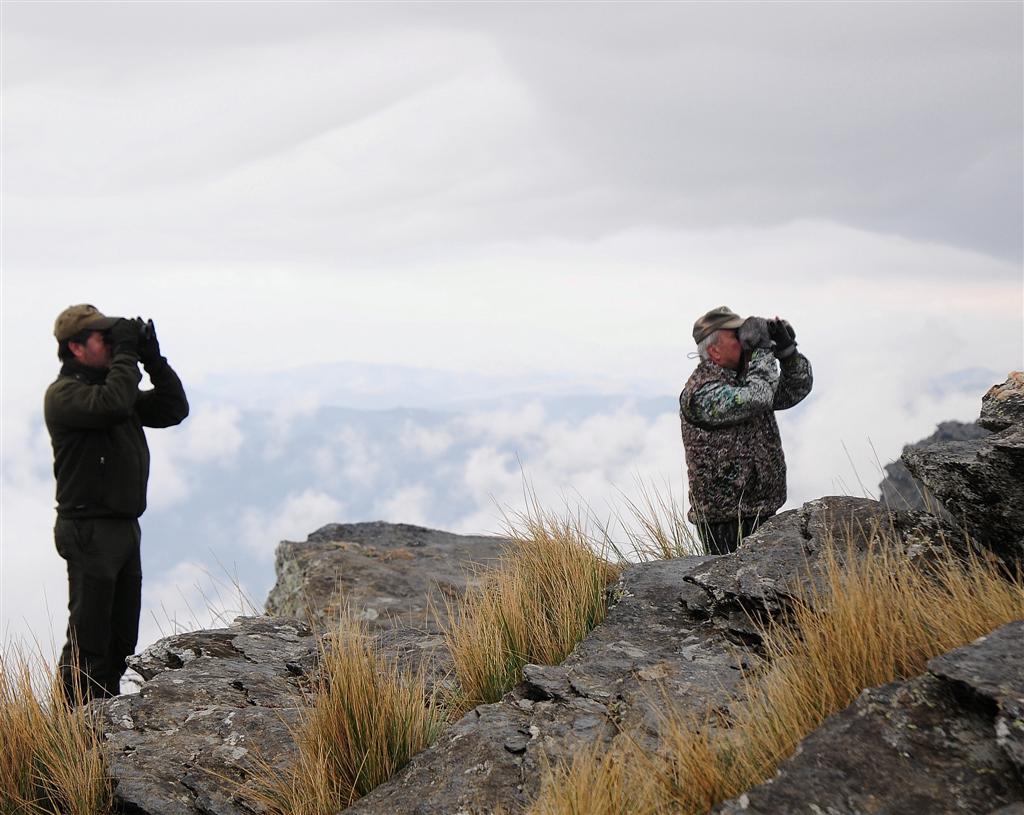 Our third and last day started out with a light rain at the lower elevations, and a

snowstorm on top of the mountain. But it was not long before Gaspar spotted a herd of

seven rams, and we initiated a stalk on the animals from above in an attempt to cut them

off, but not before they spotted us and rapidly crossed an expansive valley below us that

stretched for over a mile, then up a steep, rocky bluff, crossing a saddle, and then

Returning to our vehicle, we drove to the top of the mountain but discovered it

was once again blanketed in fog.

Velefique that wound through the lower mountain range. Not one mile from the village

rocky precipice high above us. In an attempt to catch up to the animal, which we hoped

was accompanied by other rams, we hiked over the soaking wet bunch grass laden

mountaintop for over a mile, but failed to relocate the ram. Arriving at the opposing

day one, we spent over an hour in a light rain and strong, cold wind, glassing the many

caves on the boulder-laden mountainside in search of bedded rams, but only saw one ewe

before we departed the area.

and its lamb. Following a short break for lunch, we made another attempt to hunt the

higher elevation, but fog preempted any attempt to locate animals.

By three p.m. we returned to where we observed the seven rams in the morning

the other side. Following Gaspar and Vicente, walking was not overly challenging until

Exiting the saddle there were no rams to be seen, but we did see one ewe high

above us in a boulder-strewn area that could easily hide the rams we were after. Once

again, we climbed the steep mountainside. But it was not long before we spotted the

rams. Slowly I made my way up to the guides and glassed several rams as they fed their

way along the rocky outcrops. 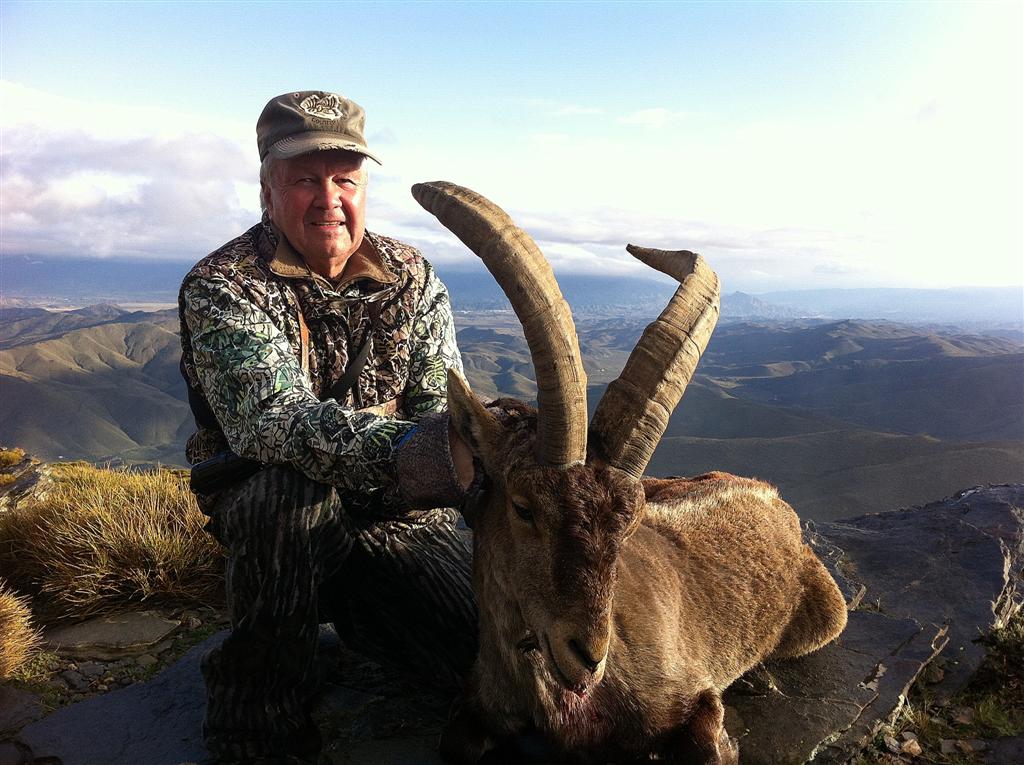 Once they moved off we climbed higher and caught up to them once again, but as

we did they became aware of our presence. Picking out a boulder that I could shoot

from, I agonizingly crawled up to it and scoped several rams about 200 yards from us.

With my 7mm laid on Vicente’s backpack, I aimed at the various animals while Vicente

In his broken English all I heard was “Don’t choot, don’t choot” when suddenly

he said “Do you see the two rams on the boulder- choot the one on the right.” As the ram

faced me at 200 yards, I aimed at the base of its neck and the crack of my .7mm shattered

of the most scenic regions on the planet.