You are at:Home»Deer»Hunting Tactics – Calling 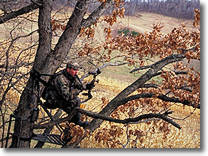 If your grunt calling interests only one buck in 12, consider that animal a bonus buck that you never would have seen if you hadn’t done any calling.

Deer verbally communicate with each other just as humans do but they ‘call’ to each other instead of talking. As different words mean different things, so do different calls. Hunters can capitalize on calls by imitating them to lure deer. The main time artificial calls are used is during the rut. The bucks are used to hearing deer vocalize a lot at this time and are willing to investigate sources of calls.

Bucks grunt year-round-while around other deer at a feeding area, while tending a doe, while fighting another buck during the rut. Mimicking grunting with your voice or a call can sometimes interest and lure a buck, especially during the rut.

Early and late in season bucks grunt softly and sporadically. They grunt more intensely when chasing and tending does during the rut. So as the rut progresses, pick up the grunting pace a little bit. But don’t overdo it. Hammering out series of loud, quack-like grunts will get a buck’s attention, but the wrong kind!

Good strategy is grunt softly 3 to 5 times, maybe a little more during the rut. Wait about 15 minutes and then try it again. You never know when you might strike a buck and reel him in.

When you spot a buck ducking into a thicket, crossing a ridge or tipping by too fast for a shot, grunt at him. Half the bucks you call to will stop and look back, maybe offering a shot.

Fawns bleat when they are hungry or have become separated from their mother. Using this call may trick a doe into coming to your area because she thinks a fawn needs her, while the rutting buck follows her in.

This is known as the alarm/distress call. This is made by the deer forcing air through their nostrils noisily.