You are at:Home»Journal»Hunting Ibex in Spain

I crossed the Atlantic for the second time in 2013 to pursue one of the four unique species of ibex in Spain. I had always wanted to hunt ibex, but it was not until I met Vicente Gil, owner of Caza Hispanica, at the 2012 SCI convention that it became reality.

The flight over the Atlantic on March 8 was uneventful until we landed in Paris when thanks to an inept ticket agent we missed a flight and endured a 12-hour layover before they allowed my permitted rifle to be imported into Spain.

At midnight my wife Jan and I landed in Valencia, but didn’t let that slow us down as we spent the entire next day touring the sparkling city on the Mediterranean. 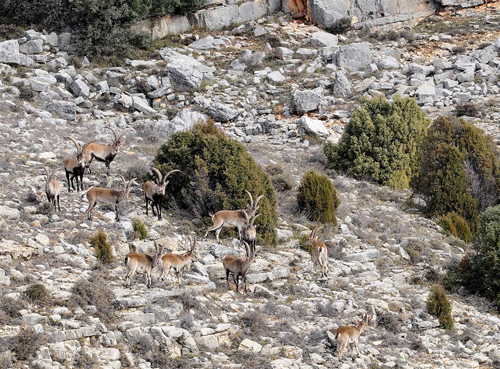 On Monday morning Alberto Costas, our interpreter, picked us up at our hotel for the hour-and-one-half scenic drive north to the rocky, pine-tree-laden Beceite mountains and our new residence in the four hundred-year-old Los Leones Hotel located in the quaint little town of Rubielos de Mora. Shortly after getting settled in, we caught up with our guide Oscar Greg Ghet and shortly afterwards, we were on a rocky mountain road overlooking a deep canyon where we caught up with Vicente who spotted a huge-horned ibex on the opposing side of the canyon. 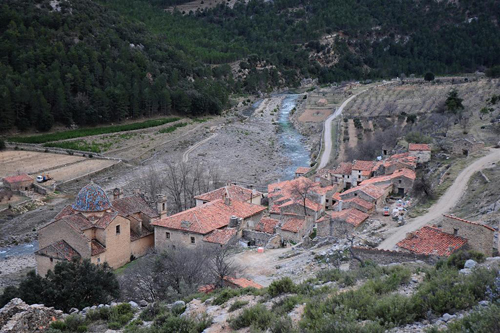 I was visually salivating over what I had traveled so far to see, but one of its horns was broken off.  A smaller ram was bedded below in the shade of tall pines and holly oak which I came to find out is a preferred food source of the Beceite ibex.

We saw several other goats before dark, but nothing that satisfied my guide’s criteria to shoot. As a snowstorm developed, we made our way back to our hotel where we enjoyed fine wine and an exquisite dinner before turning in. 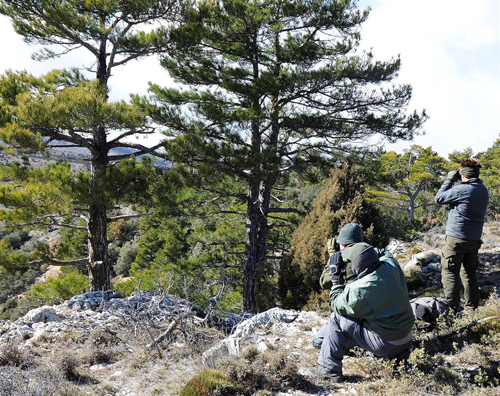 A light trace of snow and winds in excess of 50 mph failed to discourage us the second morning. We stalked a herd of seven rams with several shooters in it, but the strong, erratic winds relinquished our presence and they descended the rocky, upper canyon, disappearing into the heavily vegetated canyon floor.

The afternoon was slow, but we enjoyed a visit to a village named Estrella located in a deep valley surrounded by steep, mountainsides littered with the ubiquitous rock walls built hundreds of years ago. Privileged to meet the village’s only occupants, an elderly husband and wife, we were allowed to enter a 300-year-old Catholic Church used only twice a year. It was truly one of the highlights of our trip!

Wednesday I hunted with Vicente, and we spotted a good ram early on in the morning hunt, but lost it as a result of a snowstorm that dramatically reduced our visibility. Stalking from above, we walked unknowingly to within 50 yards of a bedded herd of 15 rams, remaining only long enough for us to see several fine rams disappear over the canyon wall. 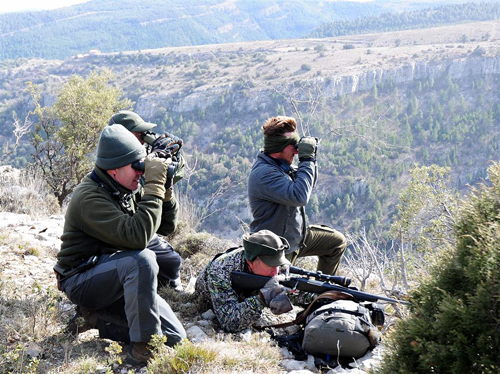 The entire afternoon was spent attempting to glass the canyon where we first spotted the large ram, but excessive wind combined with snow prevented us from relocating the animal.  By dark we drove slowly back to Rubielos de Mora in four-wheel-drive as the mountain roads turned dangerously icy. Upon our late arrival, we enjoyed a welcoming fire along with exquisite wine and another exceptional dinner.

My fourth and last day was challenging. With temperatures below freezing and a 60+-mph wind that cut like a knife, optimism or at least the realization that I may leave Spain without an ibex began to surface. With ice-packed roads leading to the area we had been hunting, we hunted another area, but only until the roads became passable. By noon without seeing a ram, we ventured back to where we hunted the last couple of days. We were met by Sevino and Oscar who informed us of a fine ram they had located. Shortly afterwards, we located the ram, now bedded down with four other rams, and made a stalk on the group. At 253 yards across the canyon, I took a little too long to get a comfortable rest, and by the time I did, they got up and walked off into a maze of holly oak trees. Disappointed, we made the long trek back to our vehicle, but continued to hunt. 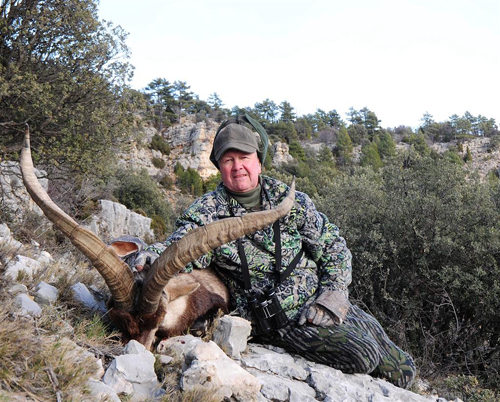 For the first time in three days, it was sunny, but still windy, and I couldn’t help but think that my opportunity to take that ibex may be my last. A little over an hour later, we were slowly negotiating our way along the sunny side of a steep mountainside as ibex fed on the same slope. Careful not to disturb the animals in case a mature ram was amongst them took considerable time as we intensively scrutinized every bush just in case a mature ram was amongst the herd.

Oscar, in the meantime, remained above us and spotted a huge ram bedded down, but we could not see it from our position. So as the young rams and ewes dropped down into the canyon, we worked our way up to Oscar, and it wasn’t long before I was granted another opportunity. With my rifle firmly laid over Oscar’s backpack, I realized another exceptional outdoor memory—a gold medal Beceite ibex.