You are at:Home»Deer»Deer Anatomy – Antlers
Antlers are a buck’s crowning glory. Most researchers agree that antlers evolved as a weapon to gain dominance over other bucks during the breeding season.

Antlers, composed of bone, are the fastest-growing tissue in the animal kingdom-they grow an average of 1 to 2 inches per week during the spring and summer! Growing antlers are covered with velvet, which contains blood vessels and nerve endings. They are sensitive to touch. A buck can deform his soft, developing rack if he is not careful.

Once antlers reach full growth and mineralize in late summer, the velvet starts to peel. Bucks rub it off in a day or two. Bucks wear hard, polished racks throughout fall and early winter. After the breeding season, bucks shed their antlers (January through March, depending on region). A new set of antlers then begins to grow in their place. 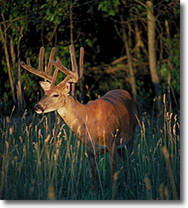 Velvet covers a buck’s growing antlers. The brownish fur, which contains a network of blood vessels and nerve endings, supplies the developing antlers with much-needed nutrients. Velvet-rimmed antlers are fragile and bruise easily. That is one reason bucks remain fairly docile during the spring and summer months. If bucks do decide to tussle, they flail out at one another with their forelegs, no doubt to protect their developing antlers.

When antlers reach peak growth and harden in late summer, the velvet dies and dries up. Bucks become irritated by the dead tissue and remove it by rubbing their antlers against trees, limbs and the like. Interestingly, a buck sometimes eats the peeling velvet.

When the velvet “rub out” is finished, a buck is ready to challenge other bucks for breeding rights. Male deer, once passive over the summer, are now primed to spar and fight with their antlers. This change in temperament is due to an increase in the bucks’ testosterone level.

Antlers are often mistaken as horns. However this is misleading, since horns are permanent, where as antlers are tissue which fall off annually. The deer family are the only species in the world to grow antlers. Antlers are believed to have evolved as a fighting weapon which help in establishing the dominant male, although they are also used to rub and dig in the snow when searching for food. The biggest healthiest bucks usually have the largest antlers and do most of the breeding. In fact, deer with very impressive racks my not even have to engage in any combat to succeed during the rut. The larger set of antlers helps dominant bucks build stronger neck muscles, which is also an asset during combat.

Contrary to popular belief, temperature and rainfall are not factors in antler growth. Nutrition plays the biggest role in antler growth. The antlers of a healthy adult can average anywhere from 3.5 to 9.0 pounds.

Antlers are very similar to bone. They are supplied with blood through blood vessels in the velvet and through the core of the antler. Antler growth is triggered by the increase in the amount of sunlight during the spring season. The necessary nutrients for antler growth may be taken from other bones in the body, thus depleting the nutrients in these bones and making them brittle.

The whitetail’s antlers grow from March until September; the growth process takes about three months. Fawns do not have antlers; antler growth is first seen just after the buck’s first birthday. However, occasionally southern bucks have been known to grow 3 inch spikes in their first year. Antler growth begins at the pedicles. These are permanent bony stubs on top of the deer’s head.

Research has shown that moist antlers are usually the strongest. Bucks keep their antlers moist by rubbing them through leaves and mud; this process is called horning. This keeps the antlers moist and strong.

Around January, bucks will shed their antlers. This comes after the rub-out; the lack of blood flow to the antlers renders them dead and useless. Sometimes both antlers fall off within minutes of each other. Other times, one antler may fall off before the other. The antlers will begin growing again in March. Antler size is determined by nutrition and genetics. While genetics play an important part in the shape and size of antlers, the diet of a whitetail buck can either aid or hinder their growth. During the antler growth period, bucks require a substantial amount of minerals. If their diet does not provide the required amount, the necessary minerals will be supplied through other skeletal areas and returned after the growth period. Although this trait is a helpful way of procuring essential minerals, it is not the best substitute for a rich food source. However, even if there is an abundance of minerals in an area, bucks still undergo some mineral depletion in their skeleton.