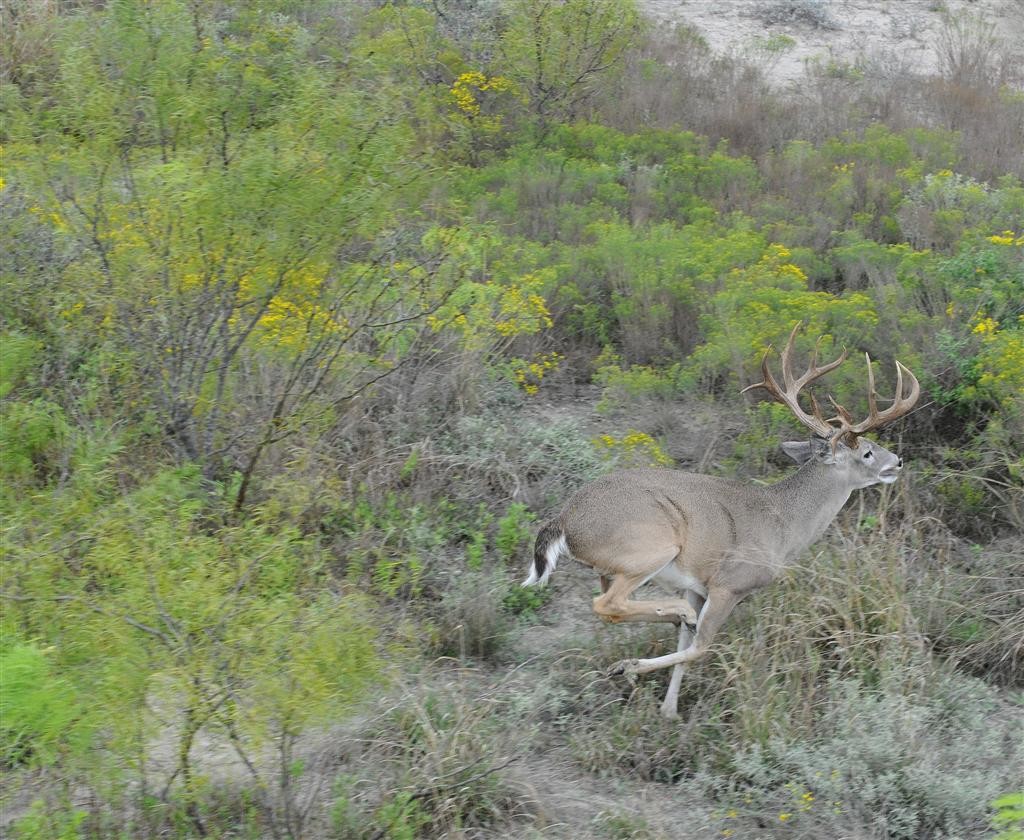 Buck number one was spotted on a Maverick County ranch that did not provide a supplemental feed source this past summer. South Texas deer nutritionally benefitted from a wet spring and actually back-to-back wet years in Maverick County, but an above average rainfall year is not always what it is nutritionally cranked up to be because deer entertain a wider choice of forage, some of which may taste good, but is not as nutritionally beneficial. In other words, a greater variety of succulent plants develop throughout above average rain periods, but those water-laden plants reduce the deer’s use of those nutritionally stronger brush species.

Buck number one is an incredible buck, and knowing the landowner, I may get another opportunity to see it again next year. A hunter wouldn’t spend much time judging the rack of buck number two except for the fact that this extreme buck is immature. Although I estimated its age at four years, it could be an exceptional three-year-old, thus it remains a couple of years shy of exhibiting optimal antler size. 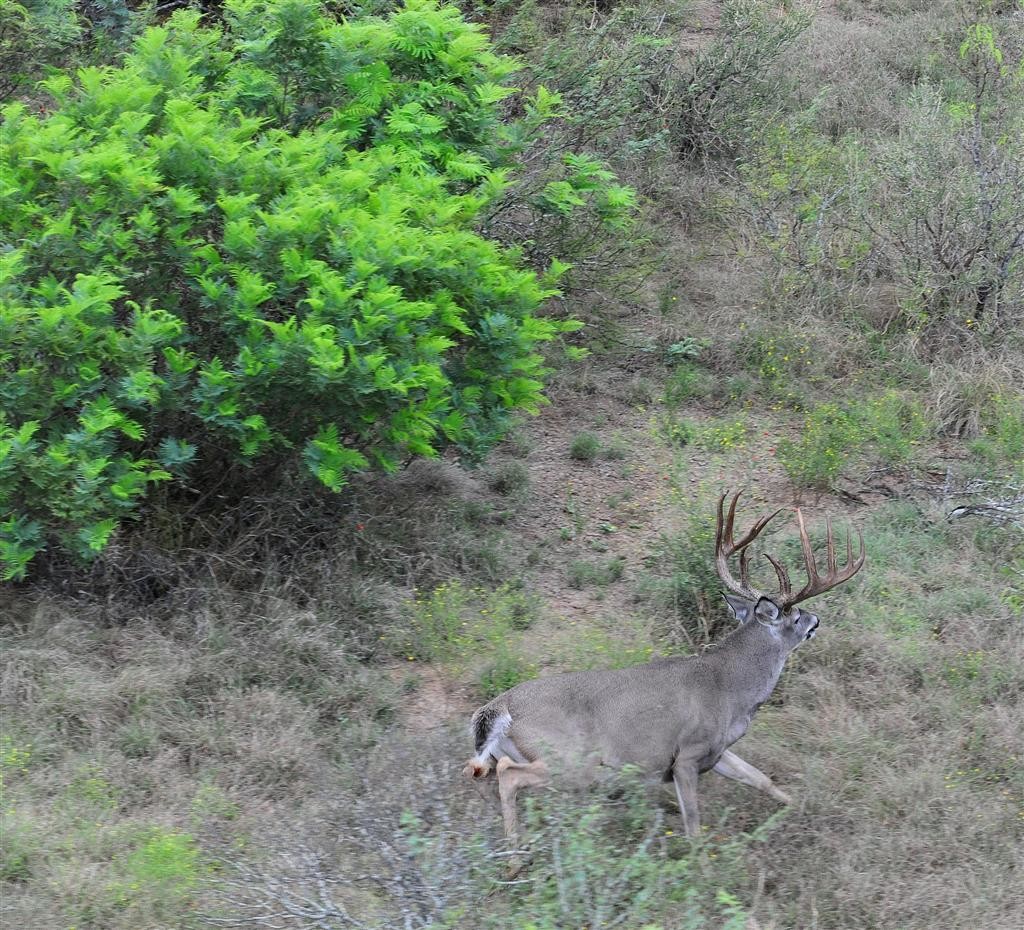 Scoring close to 200 inches at present, there’s no telling how much larger those antlers can get. However, allowing this magnificent deer to walk may be the last time it is seen, but that’s the gamble trophy hunters take each and every time they pass over a buck. But if it’s big deer you want, those above average bucks are the ones that must be allowed to walk.

With twenty-four-inch beams and extremely tall tines, buck number three will easily breach the 190-inch mark. Once again, passing over a buck exhibiting a rack of this caliber is extremely hard, but this extreme buck may be the youngest buck I observed this past year.

Buck number four is a Live Oak County deer that has been watched by the landowner for three years. Actually, it looked like a runt as a yearling, and the landowner even considered harvesting the animal in 2014, but after seeing him this fall he was glad he didn’t. With 24 to 25-inch-long beams and 20 scorable points, it will approach the mid 190-inch range. 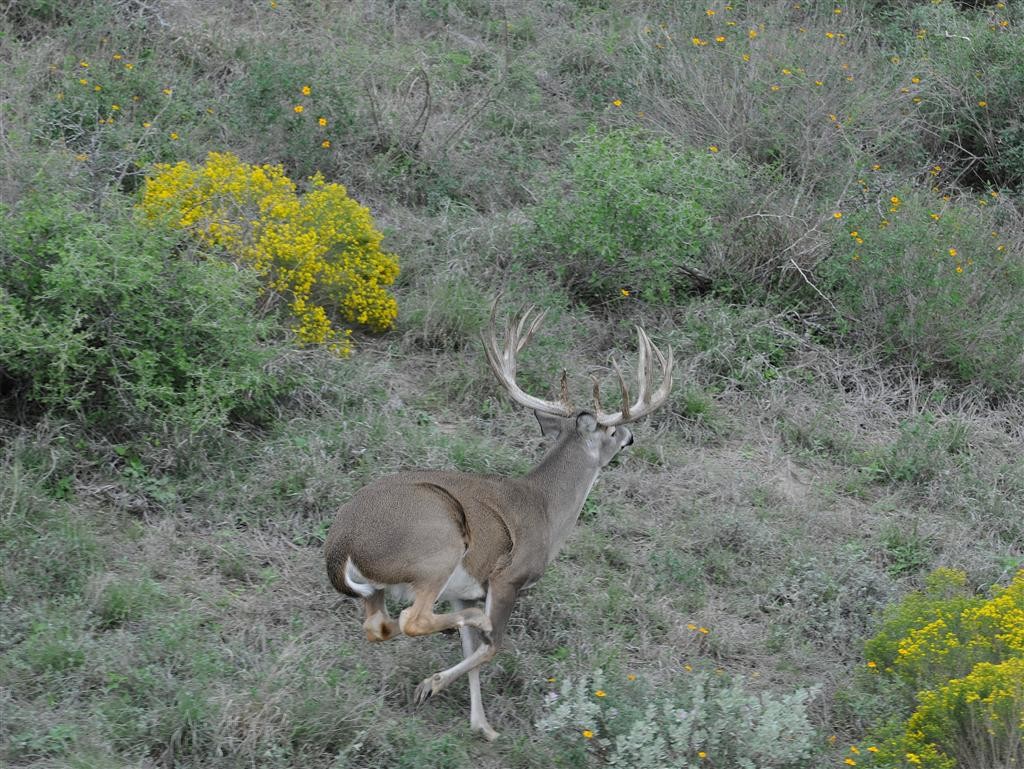 Extreme buck number five is another Maverick County resident. Its heavy chocolate rack is much bigger than it looks. I actually captured the buck last year and temporarily utilized it as a sire in a Deer Management Permitted enclosure to capitalize on its superior antler traits. In 2014 it gross scored 184 and netted 174. Unfortunately, I can’t verify its present estimate approaching the mid 190’s because I couldn’t find the animal two weeks after seeing it on the annual aerial survey, even with two helicopters. But he is definitely larger than he was in 2014.

Failing to relocate particular bucks is not uncommon, and this is the second buck I was unable to relocate on this particular 8,000+-acre spread. The ground surface appears amazingly open from above, yet some deer continually avoid being seen. This is especially the case on ranches that are aerially surveyed on an annual basis, and it’s especially evident on border lands that are chronically flown over by border patrol aircraft. 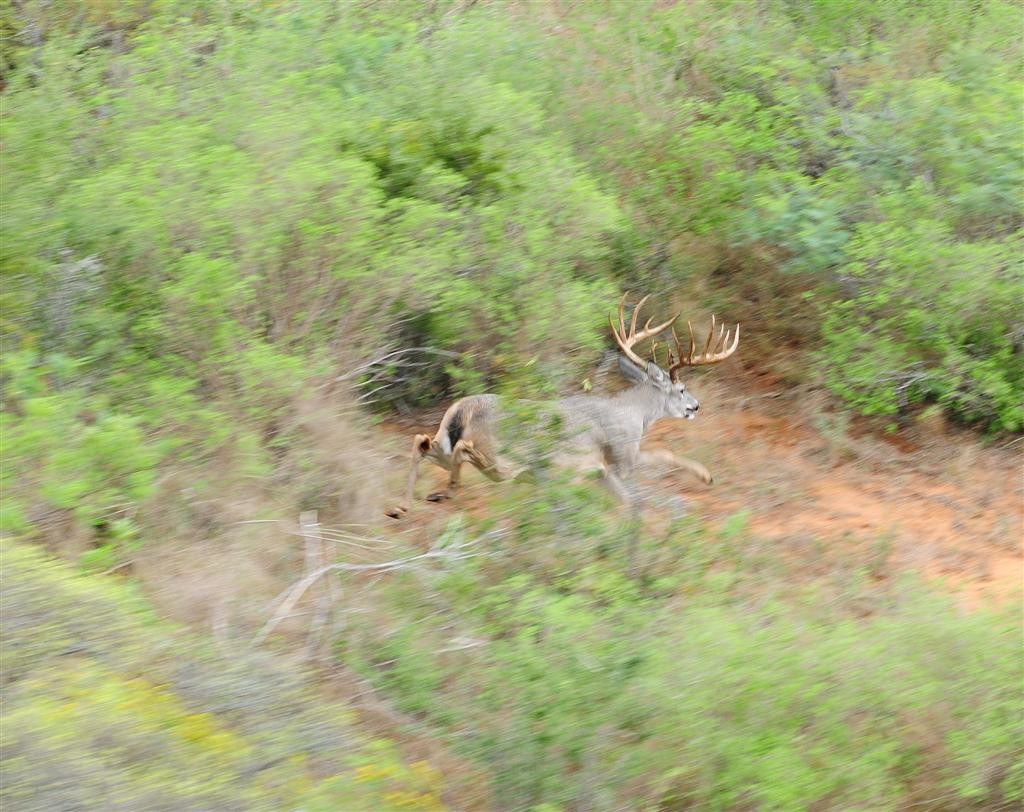 Extreme buck number six may not score all that well, but it’s simply an attractive deer exhibiting the right stuff. Unquestionably young at three years of age, and possibly two, I hope I get to see him again in the future. This particular Kinney County buck originated on an intensively managed ranch where deer are protected until their seventh and eighth year. This being the case, this buck will have ample time to develop a super rack.

The bucks I observed this past fall demonstrate just how large those south Texas racks can get when rainfall is abundant, particularly on well-managed ranches.